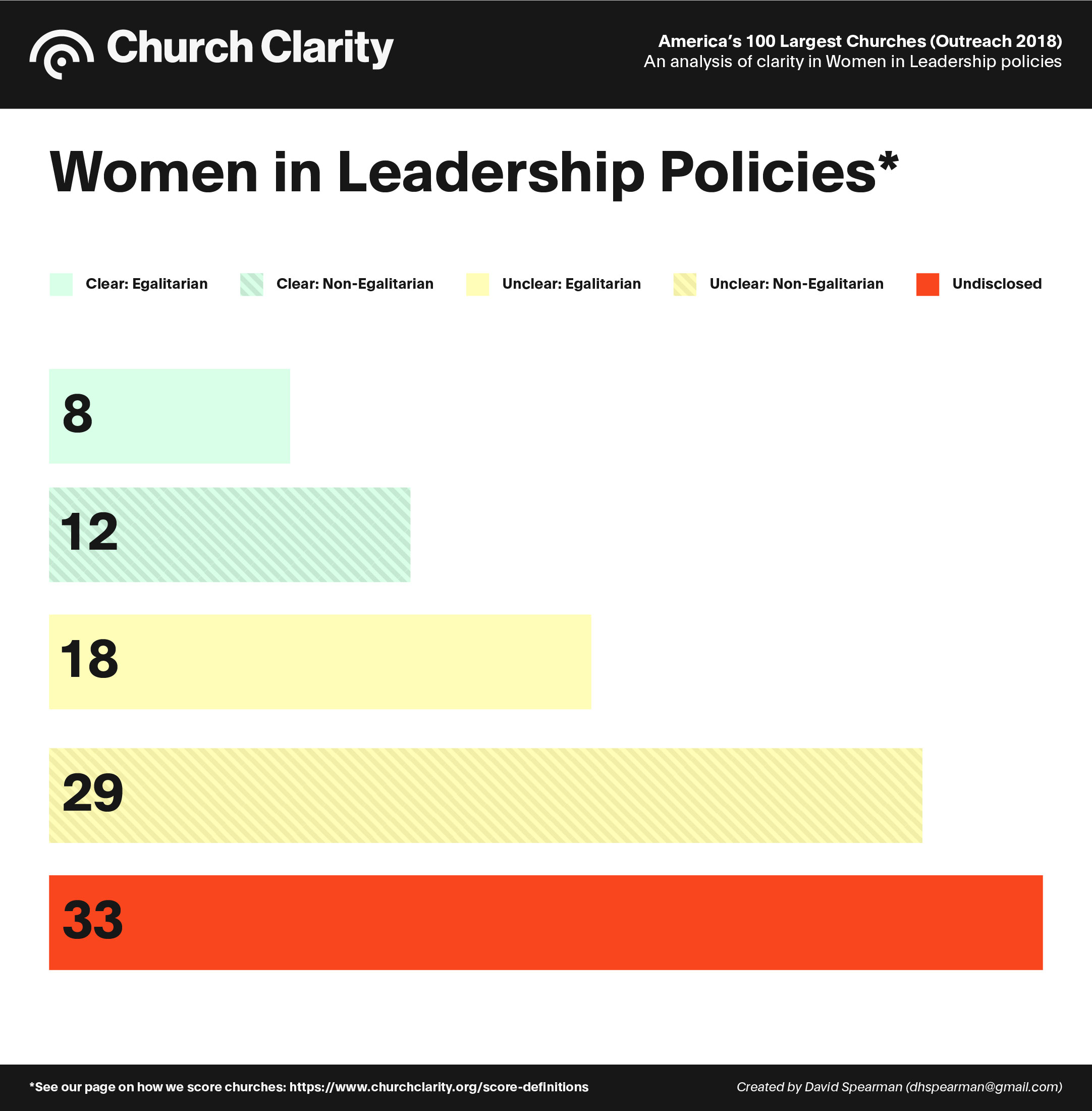 Last year, Church Clarity scored Outreach Magazine’s 100 largest churches in America for how clearly they communicated their actively enforce LGBTQ policies. While those scores have largely remained the same, this year’s report examines how clearly the 100 largest churches, based on Outreach Magazine's annual report, communicate policies that impact Women in Leadership.

The two most common scores among the list of the Top 100 this year for Women in Leadership were “Undisclosed,” our lowest possible score, and “Unclear: Non-Egalitarian.”

One-third of America’s 100 largest churches were scored as “Undisclosed” which indicates their websites did not provide conclusive evidence as to whether women are eligible to hold any leadership role and preach on Sunday services. Keep in mind that this does not mean the church has *no* policy (they probably do); the point is that we were not able to tell based on publicly available online information on the church's and denomination's website.

29 percent of churches’ websites were scored as “Unclear: Non-Egalitarian” indicating they do not clearly state their non-egalitarian policies – policies that restrict women’s eligibility from holding all leadership roles – on their websites. Their policies were instead located either on peripheral pages of their websites(e.g. sermons, blogs) or on their denomination’s websites. To earn a “Clear:Non-egalitarian” score, a church must locate its policy on the primary pages of its website (e.g. Beliefs, About Us).

Among churches who communicate Egalitarian policies, one-third of them meet our criteria for “Clear:Egalitarian.” That is, their websites indicate women or non-binary people makeup at least 50 percent of the church’s senior leadership teams (e.g. board, elders, vestry, pastors), and that they preach on Sunday services. The other two-thirds may present as having an egalitarian policy, but fail to fully live out the requirements of gender representation on their leadership teams. For more on how we score representation, read this.

Each of these churches was contacted by us to fill out our Verified Clear policy survey, given them an opportunity to be fully clear about their actively enforced policies. No churches chose to fill out our survey.

Yet, Southern Baptist churches (24 of them appeared on the top 100 list) were more likely to state clear policies for LGBTQ people than Women in Leadership on their website (54 percent, compared to 29 percent). The Southern Baptist Convention, as a whole, enforces non-egalitarian policy and restricts women from holding the office of elder or pastor.

Independent Christian Churches have a more ambiguous policy: The denomination technically allows, but does not require, women to hold any leadership position within a church, but among the 16 ICC churches who appear in the Top 100 list, only 2 have egalitarian policies (unclear). 1 is “Clear: Non-Egalitarian,” 3 are “Unclear:Non-Egalitarian,” while the remaining 10 are “Undisclosed.”

Outreach’s Top 100 Largest churches were more likely to be scored as “Unclear: Non-Affirming” than “Undisclosed”for their LGBTQ policies. The reverse is true for Women in Leadership: Churches are more likely to score as “Undisclosed” than “Unclear: Non-Affirming.” There may be two factors at play. The first is that in recent years, churches are generally more likely to have preached on LGBTQ issues than on Women in Leadership; we take evidence of non-affirming theology in a sermon as sufficient proxy for a non-affirming policy.

Outreach’s annual list is a collaboration between Outreach magazine and Lifeway Research. The list is based on self-reported data from churches and represents over 1.1 million Evangelicals in America. To search our entire crowd-sourced database of churches, go here.