Dear Flatirons Church: "Biblical Authority" is Not a Policy 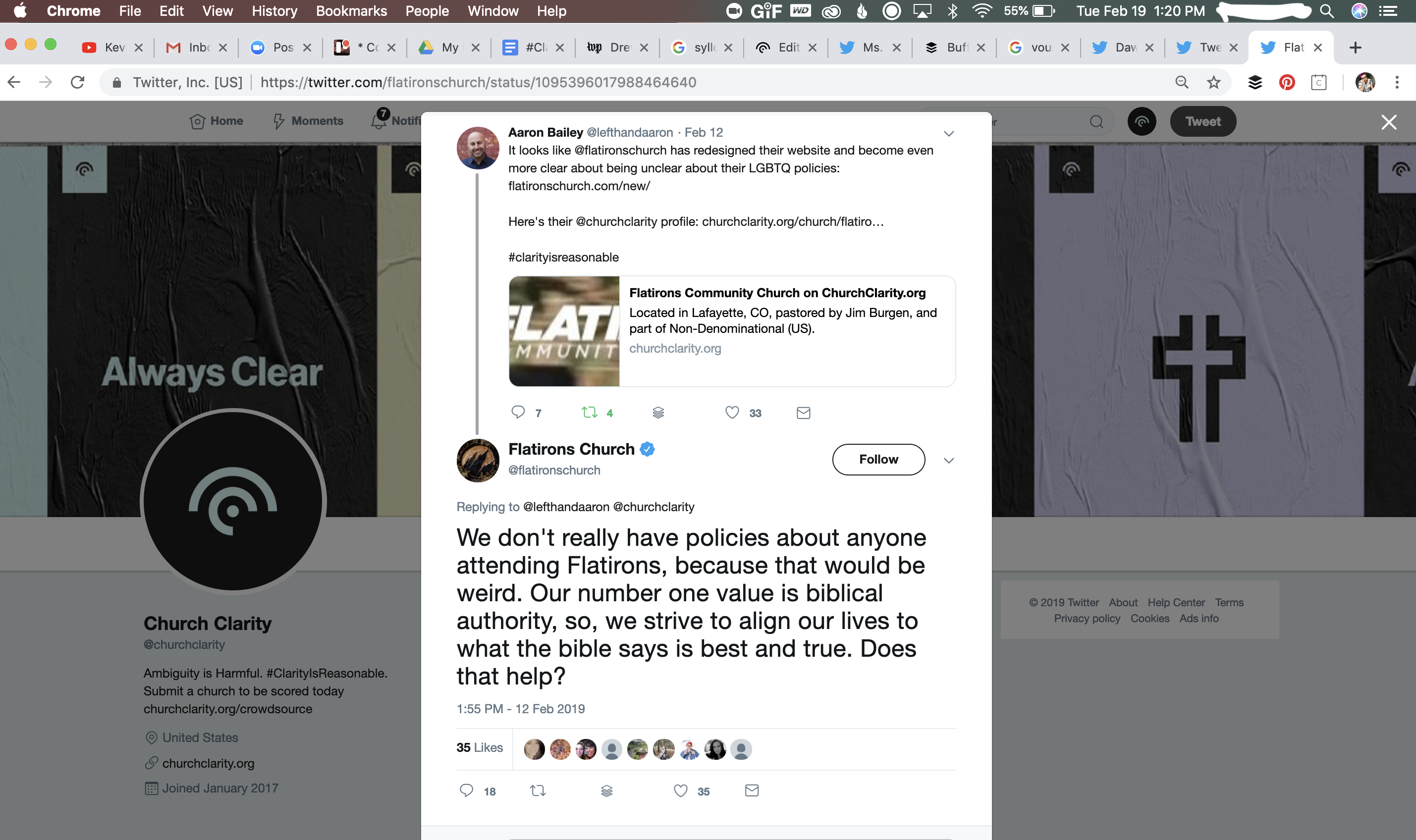 I used to really enjoy going to church. I went to all different types of churches–Evangelical, Baptist, Catholic, Anabaptist--but  I don’t like visiting churches since I came out to the world and myself as gay.

Why? Because, based on past experiences, I am afraid that when the church finds out about my gayness, they will do at least one of the following:

Now, you might be saying “NOT ALL CHURCHES!” which while true (along with the other “not all _____” statements we hear) is not helpful. Some churches, especially “nondenominational” ones, don’t like to tell say if they will have your gay wedding and let you sing on stage or if they just want you to stay in the pews and never flaunt your “lifestyle”.

Instead of being clear about where LGBTQ people fit into their church (pews, ministry, pulpit, or worship team) they throw something like this on their website’s FAQ section:

A: Yes! While Biblical Authority is one of our values, we think you’ll find that we’re not a community that throws stones. It’s our hope that you feel welcome and comfortable when you step through our doors.

It’s good to know if I show up wearing my pride pins they won’t stone** me as I try to enter the building, but that’s not what most people are concerned about when visiting one of the largest churches in the nation (see my above list).

More alarmingly, the juxtaposition of being LGBTQ with Biblical authority problematically employs a rhetorical device known as syllogismus.

Syllogismus is the fancy word for when someone leaves the logical conclusion of the argument unsaid. The simplest version of syllogismus is “I’m not going to say he’s lying, but these are the facts.” The obvious conclusion is that he is lying. The speaker has absolved themself of any guilt though by refusing to state the clear conclusion that the audience will draw.

Also, in some Inception-level cleverness, the audience will feel as though they figured out that he was lying–they considered the facts and decided for themselves. When our brains have to fill the blanks like that, we remember things more, meaning that idea will stick a lot more than if the speaker had said, “He’s lying.”

So, for the statement from Flatirons Community Church the unstated conclusion is that if you are LGBTQ, then you don’t believe in Biblical authority. Now, clearly Flatirons didn’t actually say that, and I don’t know if it was their intention, but they sure did strongly imply it, which is a problem because…

If I may use an imperfect metaphor:
A gluten-free person asks if they can eat at a restaurant and the owner says “Of course, but you should know we love bread.”

However, being GF doesn’t mean you don’t love bread. And on top of that, there are, in fact, gluten-free types of bread in the world.

By saying in response “We love bread” and using syllogismus to imply gluten-free folks hate bread, the owner demonstrated a deep misunderstanding about gluten-free people and about the nature of bread.

Likewise, the Flatirons statement demonstrates that their church leadership seems to misunderstand both LGBTQ people and Biblical authority as a theological concept. Not all LGBTQ Christians don’t hold an affirming theological position of LGBTQ same-sex relationships and practice celibacy. Other LGBTQ Christians do affirm same-sex relationships. This means that there are different perspectives and perhaps even different versions of “Biblical authority.”

Maybe if Flatirons as a church followed the Leviticus prohibitions against tattoos***, I wouldn’t mind them saying they “live under the Bible’s authority” as an answer to questions about LGBTQ people attending the church.

But they had a wall of tattoos in their foyer. Don’t get me wrong, I love it, but some might say that doesn’t follow Biblical authority.

(Did you see what I did there? Syllogismus.)

Clearly, celebrating tattoos is different than allowing LGBTQ people to participate fully as members, and that Flatirons recognizes the difference means they do not “simply” submit to Biblical authority. They clearly practice discernment about which parts of the Bible are authoritative and which aren’t.

Right now you may be thinking,“But they are allowed to have different interpretations of Biblical authority” or, “I don’t remember what this blog post was supposed to be about?! Was it always about Biblical authority?”

Here’s what I’m trying to say in all this:

If I want to be a part of a church, I need to be able to grow there as a member, which means having the options to host a small group, work in a ministry, and talk about how much I love my wife.

If a church can’t offer that to me–that is okay. Really. As we said earlier, not all churches and I only need one, but they shouldn’t hide that they can’t meet my spiritual needs.

If a church doesn’t know if they can be what I need them to be, that’s okay too. But, again, they shouldn’t say one thing if it's possible they might “change their mind”.

Saying they submit to Biblical authority doesn’t tell me whether I can spiritually grow at that church or not, because in my mind I submit to Biblical authority too. Yet the fact that Flatirons feels the need to say they won’t stone me makes me think they might not be on board with my wife and I crashing their next couples dinner, but I don’t know for sure because they haven’t told me.

Which brings me to the title of this blog. Asking churches to be upfront on their policies surrounding LGBTQ people (and women in leadership) is reasonable. If churches are afraid of losing membership when they publish their policies, they should take a good hard look at where that fear is coming from. Most churches would never tone down or hide language about the divine nature of Christ in order to “reach out” to people–why do they feel like it is okay to hide these policies?

If you go to a church, ask them about their policies, especially before you invite your LGBTQ friend to join you. Visiting Church Clarity’s ever growing database is a great place to start.

Saying “They love everyone!” isn’t enough.

(This blogpost was originally posted on Meandering Mary).

*Why am I picking on Flatirons? Well, it’s one of the few megachurches of America I am personally familiar with, and when I saw their policy I felt Things. So I wrote a blogpost. This This ambiguity is not limited to them though; just visit churchclarity.org to see how widespread unclear policies are.

** Yes, I know they are referring to the whole “Let he who is without sin cast the first stone” moment, but imagine what this sounds like to someone outside of someone who has grown up without these Christian tropes and jargon. Plus, to be fair, when Jesus said that he was referring to literal stones, so I don’t feel bad taking it literally.

*** Additionally, when I visited I don’t remember them observing Paul’s instructions on covering heads during service if you want a New Testament example.

The featured image is a screenshot from a twitter exchange with Flatirons Community Church. We reached out for follow up, but have yet to receive a response.

We have scored Flatirons Church as Unclear: Non-Affirming for their LGBTQ policies and Undisclosed for their Women in Leadership policies in our database.