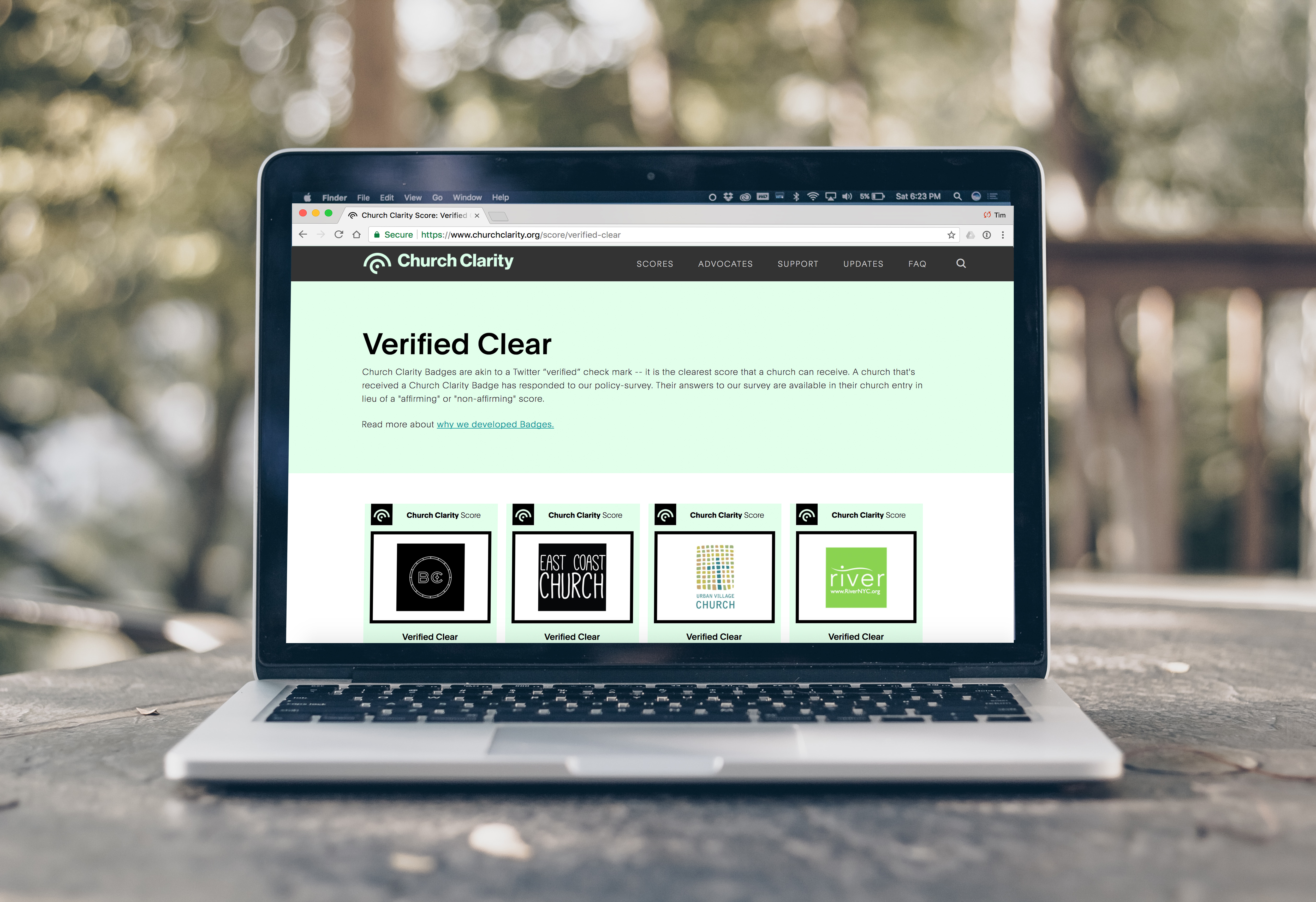 Starting this week, Church Clarity will roll out “Clarity Badges,” a designation that will replace certain churches’ scores.

We are moving to a stage where, instead of having a score such as “Clear + Affirming,” participating churches will instead have a Clarity Badge that displays their responses to these four questions:

The three options will be: Yes, No, or Actively Discerning. The answers will be collected from surveys via emails to churches.

Previously, our scoring model counted “affirming” language on a website as an indication of a fully affirming policy. Thus if a church’s website stated that “LGBTQ people are welcome and celebrated” or “you are welcome no matter your gender or sexual identity,” it was scored as “clear + affirming,” meaning, the church had no restrictions on LGBTQ people in terms of the church’s actively enforced policies.

1000+ church submissions later, we’ve discovered that there are plenty of churches, particularly denominational ones, that have “affirming language” on their websites but do not actually enforce fully affirming policies. Much of this has to do with denominational limitations (e.g. UMC, ECC) that don’t permit ordination of LGBTQ people and threaten to penalize or discipline clergy if they officiate same-sex weddings. As a result, there are actually plenty of churches that have affirming theologies, but not fully affirming policies in an effort to remain in compliance with denominational rules.

But it has an important caveat in its FAQ:

Does this mean we agree to gay weddings in our building?

Not automatically, although this is one question we’ll need to consider as we determine how to live out our commitment to welcoming all of God’s beloved children. Even though the U.S. Supreme Court has ruled gay marriages are legal in every state, the UMC Book of Discipline still prohibits them from being held in United Methodist Church facilities. Many of the congregations who have affiliated with RMN [Reconciling Ministries Network] still abide by that prohibition.

Although the language could be clearer, Community United Methodist Church’s website is fairly upfront about its policy restrictions for LGBTQ people. But our volunteer scorers and our team have found that this transparency is the exception, not the rule. Time and time again, we’ve found church websites that included language we might consider “affirming” but failed to disclose denominational restrictions that impact their local policies.

In light of the standard for clarity we are aiming to create, Community United Methodist Church’s website was scored as “Clear + Non-affirming.” We continue to maintain that our criteria for “affirming” policies means zero restrictions on LGBTQ people’s full participation in the church. Specifically: baptism, ordination, hiring, weddings, the full gamut.

There are churches within non-affirming denominations who are acting in open defiance of them. A good example is The Chicago Temple, a United Methodist Church. At a denominational level, all UMC clergy are forbidden from performing same-sex weddings, yet that does not stop this church. Its Statement of Inclusion states:

Therefore, be it resolved, that First UMC at the Chicago Temple will affirm weddings in our church building for all couples that the pastors deem to be ready for this sacred commitment and are prepared to enter into the covenant of Christian marriage.

Therefore, be it further resolved, that in the event that one of our pastors is brought up on charges for presiding at a same-sex wedding, we will support them in whatever ways possible and appropriate, including but not limited to, emotionally and spiritually. We will explore forming a not-for-profit to help defray financial and legal expenses.

We believe that Clarity Badges will allow you to distinguish between churches that are defying vs. complying with their denominational mandate.

It’s been suggested before, most recently by Barbara Wheeler in her article in RNS, that Church Clarity should work with denominational lists to see which churches are “gay-friendly.” We are familiar with these lists, particularly the lists of churches withinnon-affirming denominations who are pushing for LGBTQ equality: Within the Evangelical Covenant Church, there is Mission Friends for Inclusion, within the United Methodist Church, there is Reconciling Ministries, within Reformed Churches of America, there is Room for All, within Catholic churches, it’s New Ways Ministries.

What we’ve found is that while these lists indicate a church’s advocacy-position or its “gay-friendliness,” they do not indicate, with clarity, a church’s actively enforced policies. And that is the gap we are trying to fill. Once again: We’re not here to evaluate theology, intent, or friendliness, but policy.

Our mission and standard of clarity has always been simple, and after weighing a response to what our crowdsourced demand has revealed, we’ve determined, in consultation with our advocates and team of scorers,  it’s essential that we preserve the integrity of  our focus. Clarity is reasonable.

This is probably a good time for another friendly reminder that LGBTQ+ policies are the focus of THIS phase of our work and we are excited to incorporate more types of policies in the future.

Let us know what you think about this update on Facebook, Twitter or email us at info@churchclarity.com.