When They Denied My Baptism in Passion City Church: Erica Ferguson 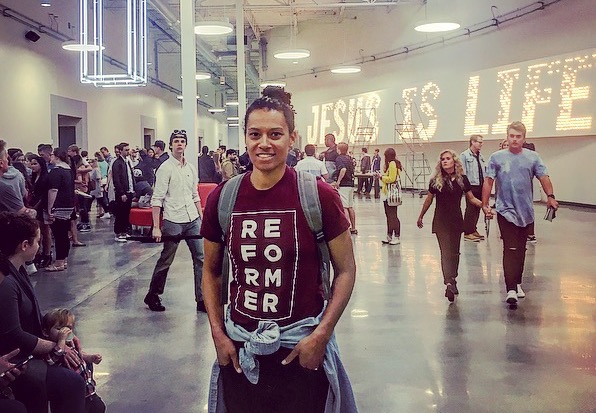 ‍Erica Ferguson was a faithful attendee of Passion City Church. She was excited about joining a community that welcomed all of who she was, including her LGBTQ+ identity. However, when she sought to be baptized, the ambiguity of  policies for  LGBTQ+ participation created a complicated cloud of hearsay and unnecessary personal devastation.

In June 2016, I went through a program called “Launch” with Passion City Church, a popular mega church in Atlanta that Pastor Louie Giglio leads. It was a six or seven week session for people that just had questions about Jesus, faith, etc. It was there that I came out as a gay woman to a church group of any kind for the first time. To my surprise, I was met with grace and love, honestly feeling like I was in a safe space where I could be my true self.

I decided to apply for baptism in October 2016. I was raised Catholic and had been baptized when I was younger, but wanted to get baptized in my own right and with my new faith and relationship with Jesus.

A month later, in November 2016, as I continued to grow in relationship with people at Passion City Church, I met with one of the people on staff for baptisms for a one-on-one coffee meeting. In this meeting, we discussed what I believed about homosexuality, and I shared with her that I was about to propose to in a few weeks to my girlfriend. We had an hour-long discussion that was hard, but it was also warm. She was compassionate and didn’t make me feel like an outsider. I left feeling good about the conversation. She also informed me that with it being a huge church and them only doing baptisms once a month that I had about 60 people in front of me so it would be awhile.

As my baptism date approached, I was getting very excited, joyous to declare my faith publicly in a church that, while they may not be completely affirming of LGBTQ+ people still affirmed that I was a follower of Jesus. But in March 2017, I get a call from the woman who did my initial interview.

She told me that Passion City Church had decided they could not baptize me at this time due to “differing interpretations of scripture.”

I was heartbroken and crushed. The church I poured my heart and my money into the past couple of years didn’t really care about me. They were concerned with the ninety-nine sheep, but not the one who was outside the flock, the one Jesus would have sought after.

Even with this incredibly hard rejection, I still showed up to fill my volunteer position I had signed as a door holder and was invited to the annual “volunteer thank you” day about a week later. It was unbelievably hard. I felt like everything they sang, spoke and preached was a complete lie. It was a full day event and I ended up walking out thirty minutes into worship after lunch, unable to control the tears streaming from my face.

However, they weren’t going to get off the hook that easy. I demanded a meeting with a pastor at Passion City Church. When I got the meeting, he was already aware, prepped, and maybe even coached on to handle the discussion.

The discussion was cordial, and the pastor didn’t avoid or sidestep my questions. But his reasoning for why I was disallowed from baptism didn’t make sense to me.

He began by telling me that I was actually not denied baptism, that when you are baptized while it is a very personal thing, it is also a part of the faith community you belong to. When they baptize people, they are anointing and making them disciples of their church. He told me they wanted to continue to journey with me, to get to know my story more before they would feel comfortable baptizing me.

But how long would this process go on? And would the fact that I was marrying a woman continue to be a determining factor in my candidacy for baptism if it was such an issue now? It had been six months since this process started. And now they want me to continue the conversation for an undisclosed amount of time until I am “ready” for baptism?

He said that it would be an ongoing conversation and encouraged me to continue to volunteer so that more people in the community and more leaders could get to know me better and really learn my heart.

I pointed out that I was still allowed to take communion, asking why I was allowed to receive one sacrament but not another? If my relationship with my fiance was sinful, why didn’t it just flat out disqualify me from participation all together?

He didn’t have an answer for me, but he said he’d think on it more.

I was now at the crossroads of deciding between staying and leaving. Do I stay in ongoing conversations in hopes to be baptized without a guarantee that this is where it was all headed?  I thought about the likely 400 or so people that attend passion that statistically were likely to struggle with sexual orientation/identity. What if they aren’t strong as me in their faith right now? What happens to them when they reach this point? What if it devastates them to the point they walk away from Christ altogether?

If I walk away from this church, from this fight, does it ever get better for the next person? For the next LGBT Christian that decides they want to be baptized? Will they feel the crushing agony of rejection like I did? As much as I want this liberation for myself, I wanted it for those would come after me even more.

I ended up meeting with the pastor a couple more times, and finally, he was honest about the policies at play.

I had pressed him on the fact that I had literally just attended service and a woman was being baptized that had been divorced three times. They told her story with no hesitation. In that meeting I sincerely wanted him to tell me how a church that swears their foundation is on scripture could permit the baptizing of someone who had been divorced three times, but not baptize someone that was marrying a woman.

Once again, he couldn’t answer and simply said that in society, divorce is an “approved sin,” that the reason I couldn’t get baptized was that I would want to tell my full story, of being gay and Christian, and Passion City Church couldn’t do that without taking a stand they weren’t willing to take.

He told me that I could go get baptized anywhere, it didn’t have to be at Passion City Church. I also was told I could attend church, volunteer, but I wouldn’t be able to go any further because my "lifestyle" would violate the statement of beliefs and code of conduct that their people must sign to be considered any part of the staff.

After these last meetings, I decided to leave Passion City Church. Their policies are still ambiguous. I couldn’t continue to be strung along by pastors who wouldn’t give me a simple yes or no answer as to whether I could fully participate in the life of this church or not.

To this day, it still is shocking to me that a church that professes to passionately follow Jesus would hurt anyone like this, especially those who have been hurt by the church already. My pain, and I’m sure the pain of countless other stories from other LGBTQ folks at Passion City Church, could have been avoided if they simply would be clear about their actively enforced policy.

The gospel is the good news. And we cannot preach good news to people who we also secretly discriminate against. We need churches to be crystal clear, to be honest about how people like me and my wife can live in community. It is the only way to end the undue pain that is still happening to LGBTQ folks everywhere.